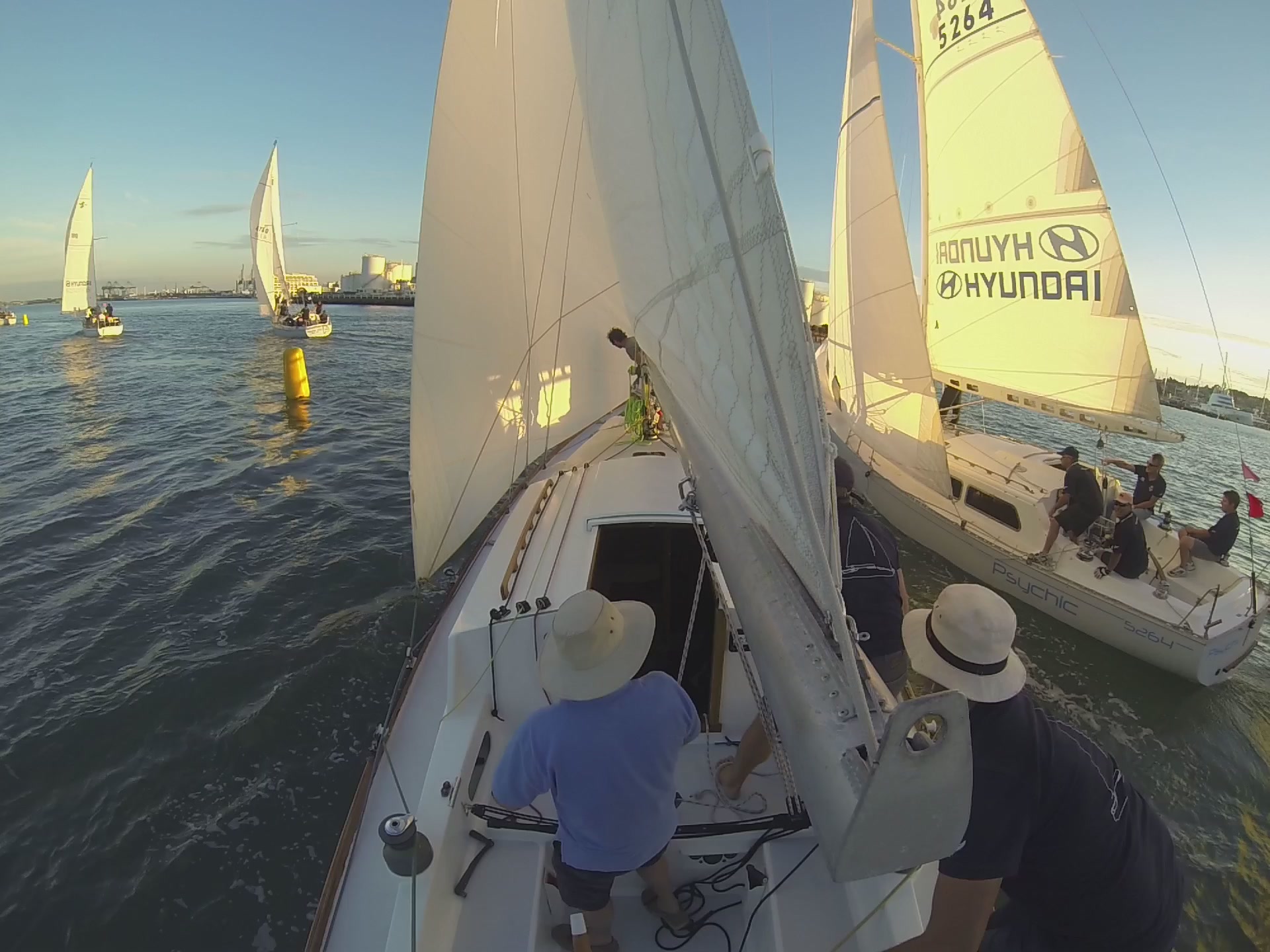 With the America’s Cup on San Francisco Bay done and dusted, and the Auld Mug safely locked away in the Golden Gate Yacht Club for another four years, Auckland yachties have  finally exhaled and escaped from behind TV screens to start their “Summer of Sailing.”

The AC 72‘s are clearly “breakthrough” yachts which illustrates just how far the sport of sailing has progressed in the last half-century.  Fifty four years ago this month, the breakthrough yacht of the day was Patiki, a light displacement 34 foot racer-cruiser designed by the late Bob Stewart, which tore up the local racetracks and led yacht design into the era of semi-planing hulls.

The Stewart 34 has gracefully aged into the “modern classic” category.   Nonetheless the 60 boat fleet still performs yeoman’s duties in both racing and cruising.  Stewarts that have been passed through two or three family generations still race weekly and take the family out on the Hauraki Gulf for a summer holiday cruise.  A younger generation of sailors keen to partake in some fiercely competitive one-design racing see value not only in the quality of the yachts, but the cohesiveness and camaraderie of the Stewart 34 owners and crew.

A renaissance of sorts has taken place within the class in the past few years.  New owners of older wooden Stewarts that have been beautifully restored, Palmyra, Panacea, Pavo and Pim, have joined the fleet of yachts that compete in the annual Championship Series.  This summer, a record 23 yachts hit the start line on Monday evenings in the 25 race series of short windward/leeward or “sprint” races in both spinnaker and non-spinnaker categories.  Patiki, Pia and Pimpernel have been showing up for Rum Races and various Stewart 34 Association cruising events.

In the Championship Series, veteran Guy Pilkington’s Playbuoy  has featured well in the 13 strong Spinnaker Division while Charles Scoones’ and his mostly female crew of Princess have captured multiple line honours in the 10 boat Non-Spinnaker Division.

There are some new names at the top of the standings as well.  Class newbie Paul Groom of Pavo has been the “most improved” and has had numerous podium finishes on handicap in Spinnaker Division. Jeff Crooks, who recently purchased Panacea and has crewed her up with mostly family members, is also handicapping well in Spinnaker division.

The Stewart 34’s continue to hold their own against similar sized yachts of much younger vintage in local mixed fleet racing events.  They usually account for 50% to 75% of the fleet in the Ponsonby Cruising Club Thursday Rum Races, with nine Stewarts hitting the start line in a recent race. It a blow however, the race often becomes a one-design race for the die-hard Stewart crews.

Stewart 34 also feature in the Classic Yacht Association Summer Series.  One or two Stewarts  are usually on the podium, sailing in the Modern Classic Division.

Kurt Boyle, owner and crew Matt Burkhardt put Pelagian II to the ultimate test in last year’s SSANZ Two Handed Round New Zealand Race.  They not only survived hurricane force winds and monstrous seas during a storm off the west coast, they went on to finish a lap around Aotearoa with no major damage or injury.

With more than one-third of the Stewart 34 fleet actively racing, and some boats in the restoration process, it looks like the class will continue to be an iconic part of the Auckland sailing scene for many years to come.