The icing on the cake.

Princess has been a regular at the Mahurangi regatta for several years. This year was a cracker.

The Saturday regatta was only part of a full on long weekend for us which started on Friday afternoon off the Devonport Yacht Club and lining up with the classic fleet for the night race up the coast. The starting signals take a bit of finding, ignoring a perfectly good flagpole, the DYC choose to drop division and start flags over the balcony.  Learning from past Devonport starts, we hit the line at pace alongside a powered up classic Tawera who cleared North head just ahead of us. Princess settled into long and short legs along the North Shore in a slowly dying breeze before edging out towards the Tiri channel into the flood tide which was gathering strength. We crept up alongside the 50ft Tawera while the fleet behind us split looking for wind. To our surprise and delight we passed Navy buoy in the lead and cleared the reef in daylight. Pia and Tawera were the next to round, by which time we had eased sheets and cracked a beer. In previous years the big gaffers have run us down reaching into the finish off Saddle Island, this time we had 30 min over the next boat home.  A fine start to the weekend.

The Mahurangi regatta gets better every year. Nowhere else will you see such a variety of eccentric craft. During a lazy morning the diverse racing fleet gathers off Sullivans bay, registration and handicap negotiations take place while swimming, rowing, kayaking, you name it, races take place off the beach.  Pavo, Pia, and Princess lined up among the ‘modern’ fleet, or more likely, anything less than 100 years old.  A swift rounding of the committee boat, due to a minor, on board, timing error, found us in clear air and on a good lift. Our race just got better from there, Two laps of the harbour in stunning weather conditions, and we get our second gun of the weekend. To cap it all, at the prize giving BBQ in the evening, we are awarded the Double.  We can thoroughly recommend the Mahurangi regatta, after all Princess’s handicap is now truly stuffed.

Sunday morning dawned calm for the CYA Mark Foy race back to Auckland. Princess was to be last away. No objection from the crew who for some reason were a little slow rousing. The whole fleet lay becalmed ahead of us in a line towards Whangaparoa. Our big blue 10 knot ‘Roydon gossamer special’ kite went up, set, and with a new breeze we slowly wound them in, all but one, ‘Prize’ who crossed the line just ahead of us at Orakei wharf, but another handicap win for us. Sometimes you get lucky.

The final act of the weekend was the Anniversary day regatta, and for ‘Princess’ it would be part of the CYA harbour series. Last year as a modern classic, we found ourselves in the same start as ‘Fidelis’, In the heavy air back then she just left us standing, this year Innismara was the big boat, admittedly it was her very first outing, and we found ourselves able to out tack her in the harbour, however once clear of North head she just took off on long tacks. To our huge surprise we came together again at Northern Leading, by which time Ranger was also alongside us having started 10 mins later. Where was the rest of the fleet? Focus on the next mark, there are boats everywhere on different courses, spectacular but confusing.  We round North head for the last time on starboard jybe to see Innismara powered up on port converging and flying her massive new gennaker.  We were in with a chance here. She dipped behind us and went off for her own ‘in house’ battle with Ranger.  Two more marks, a melee of boats , a 180 deg wind shift, the finish in sight and Innismara is not far ahead. Another handicap win to us, Princess gets her name on the savoy cup. The icing on the cake.  Charles 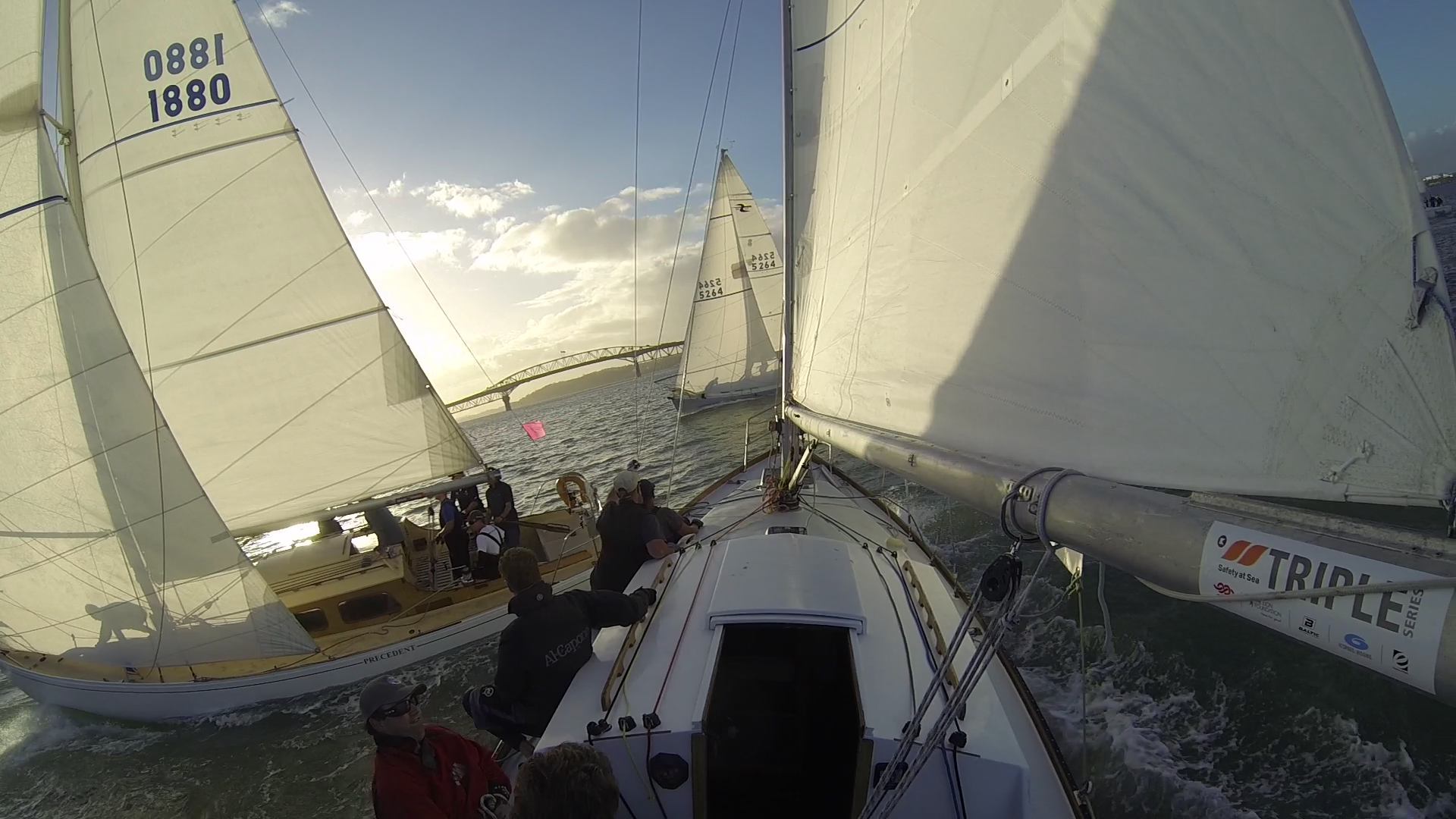 With the boats being so close in performance, simple preparation for the race can make the difference between winning and losing. A clean bottom is one of the easiest ways to make sure your boat is fulfilling it’s sailing potential. A session on the floating dock can get rid of the slime and growth, but to really make a difference you need to make sure the hull surface is smooth, as in imperfections and bumps need to be less than the thickness of a human hair. Brush on or rolled antifoul generally is too rough, but luckily the ablative types do tend to erode away to a smooth surface, especially if you wipe it with a sponge every time the slime builds up. 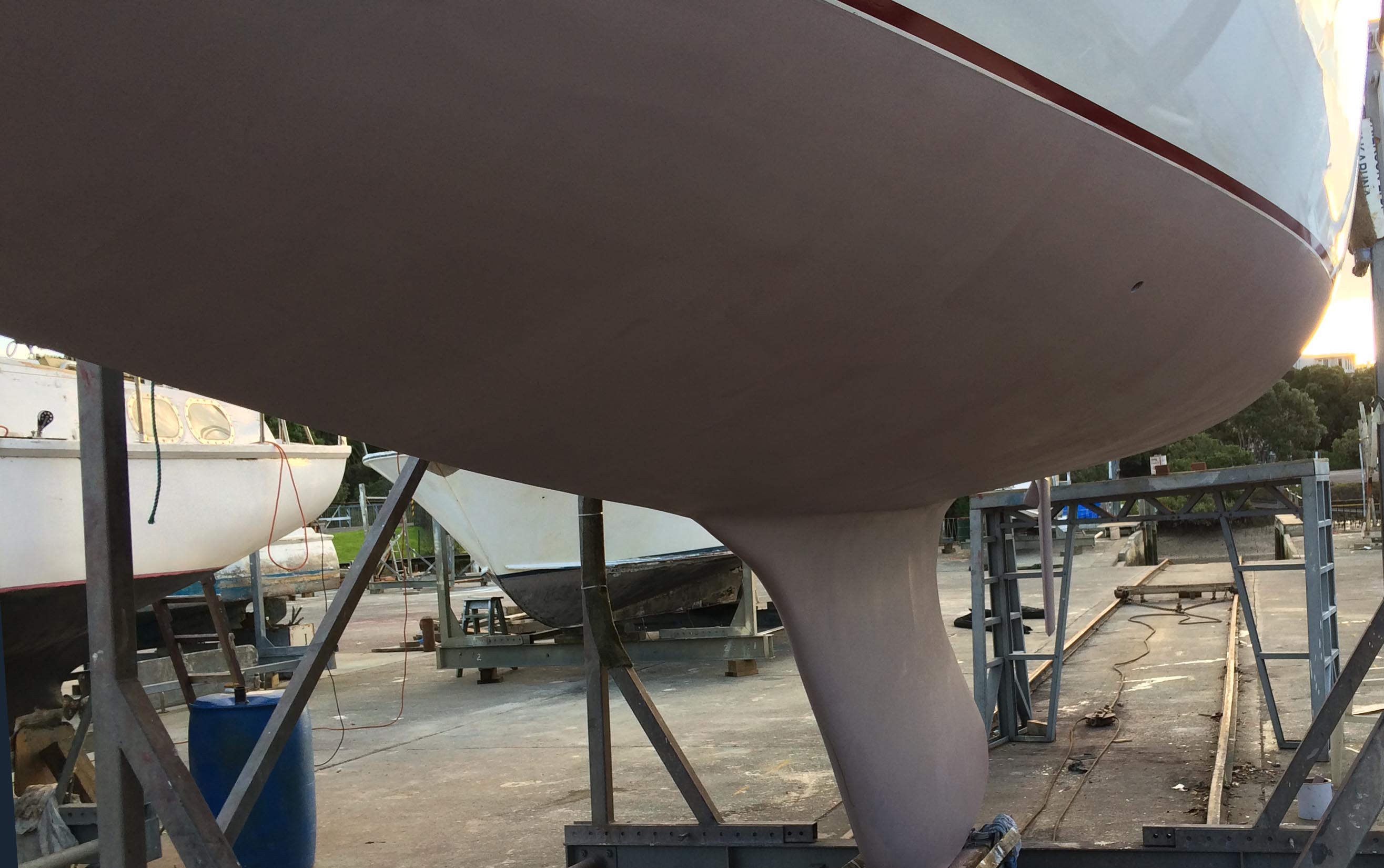 The following article has points out the importance of a smooth clean bottom, if you don’t clean your boat,  as you watch the opposition sail past, you can guarantee they will have done theirs!

Can you think of a better way to spend  a Thursday afternoon in mid winter?

Bring your Stewart Rum Racing, or come for a sail with us on one of the fleet. It’s a great way to learn the basics of racing and meet other Stewart 34 owners,  contact Cherry for more details

Overtaking On The Downwind Leg

The same rules apply downwind as on the upwind legs. When boats approach each other, a starboard tack yacht has right of way over a port tack yacht under Rule 10. Similarly a windward boat or an overtaking boat has to ensure they don’t intrude under rules 11 and 12 respectively. So nothing really changes with the big three in section A of the rules. Most situations are relatively straight-forward when two boats merge on a down-wind leg. However there are a few that need clarification.

END_OF_DOCUMENT_TOKEN_TO_BE_REPLACED 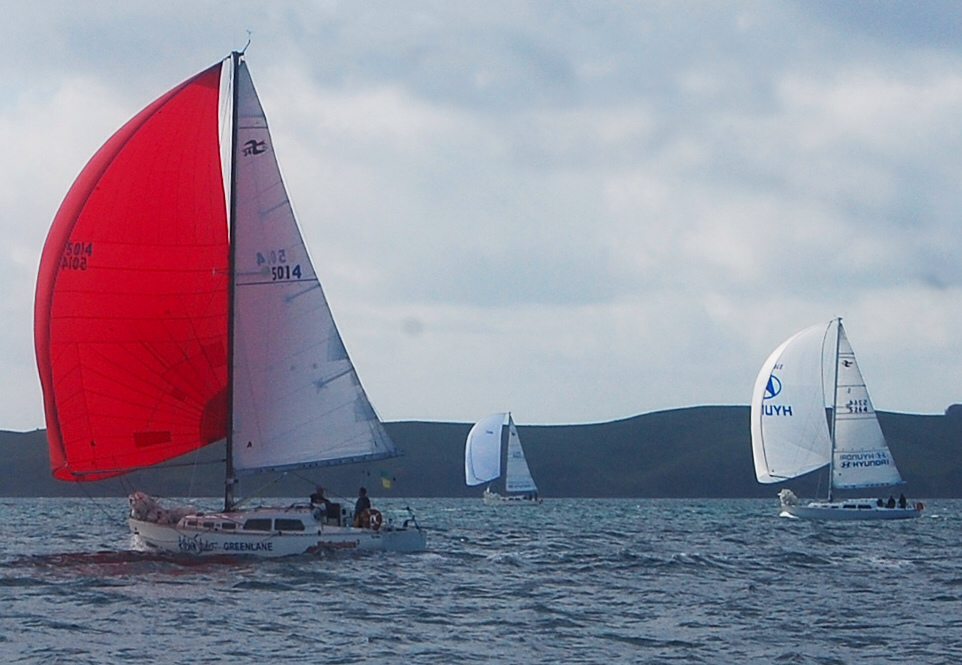 Title Image: Pelagian, Psychic and Promise heading around the back of Rangitoto in the 2013 race.

It’s SSANZ time again with the first race on July 12.  Last year the races were held in all conditions from a drifter through to a serious blow, so its a great way to test your skill in boat handing and coordination (remember what its like to be on bow!). With 8 Stewarts last year, we are well represented with our own division. Enter online at the SSANZ site 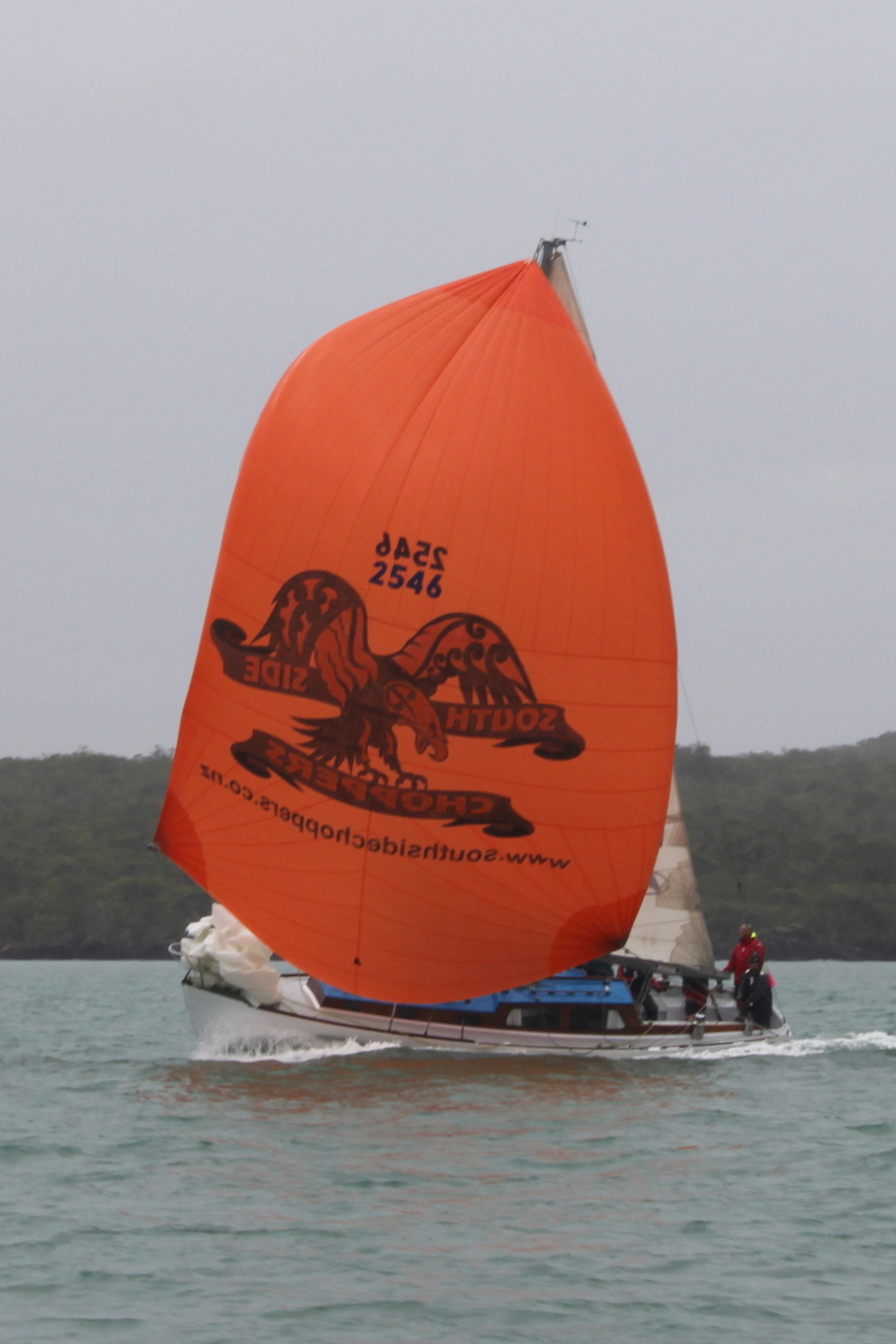 END_OF_DOCUMENT_TOKEN_TO_BE_REPLACED

Pahi, compteting in Division 3 finished third on line with an elapsed time of 15:19:47 and corrected to third on handicap.

Pelagian, skippered by Roy Dickson, finished first on line in Division 5 with an elapsed time of 15:25:19 and corrected to first on handicap as well.

Congratulations and well done to the skippers and crew! 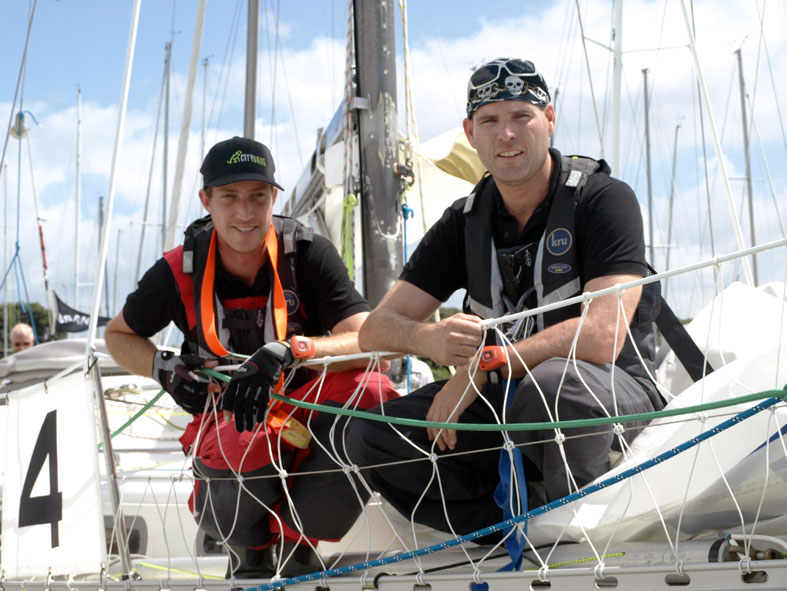