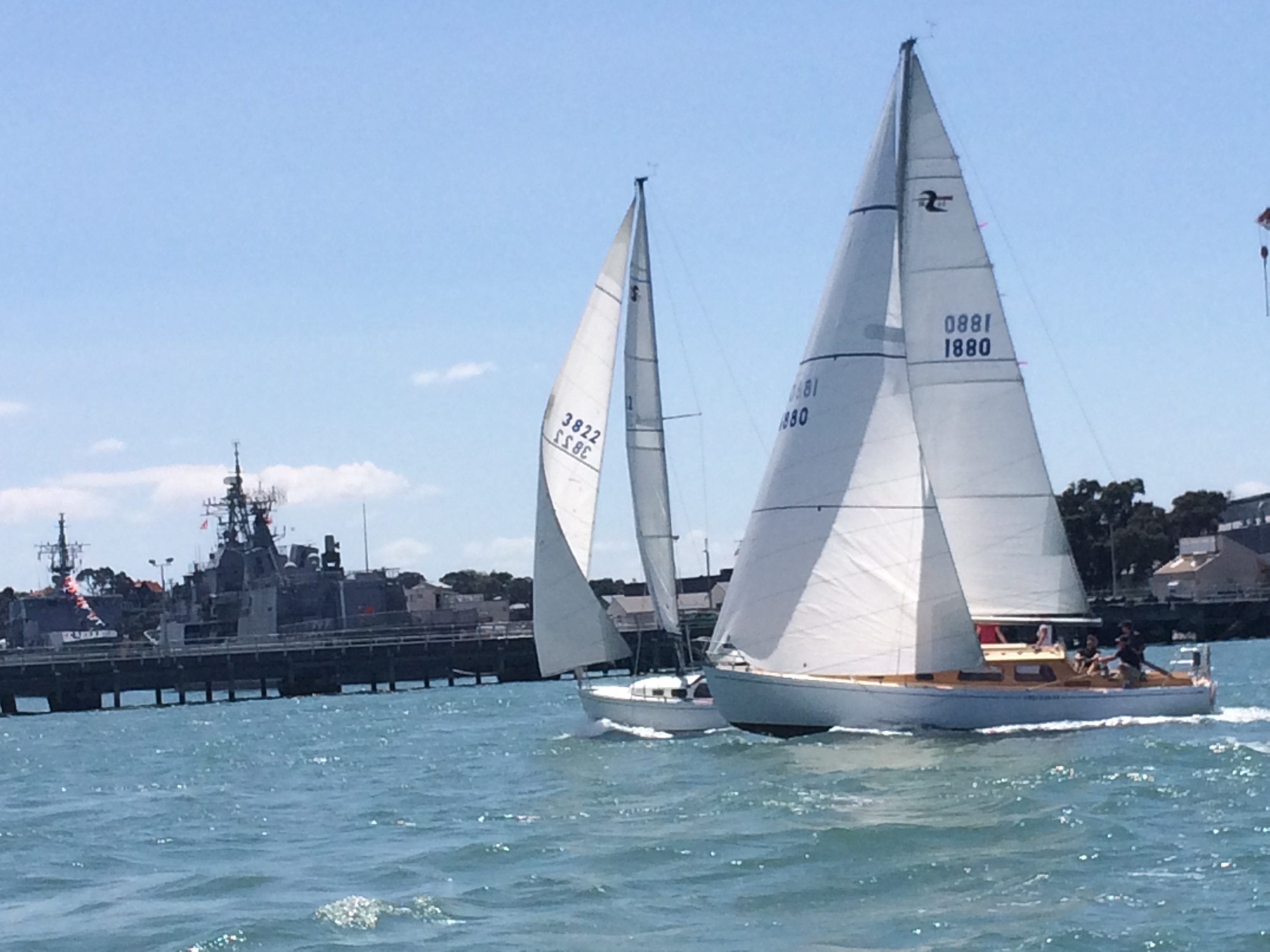 Bill is the the most senior skipper in the fleet at 90 years old, and has worked tirelessly to promote the class perhaps more than any other owner. Well known for his skill at the helm, he shares a few thoughts about the boats, the championship and the Stewart 34 family.

This is run as a windward/leeward series of 21 races, each summer.

This is by far the largest number of one-design keelboats regularly racing anywhere in NZ and has been the case for the past 50 years.

Since 1990, Pionnier – Mark Bond and I have won 11 championships, while Psyche II with Rick Roydon at the helm has won 7 and Playbouy, with Roy Dickson (82) has had 5 wins.

Don Lidgard in 1991 has been the only other skipper to win more than 1 over 25 years.

As usual, Pionnier, Psyche II and Playbuoy, were once again on the podium in 2013/14 with Pahi – Mark Taylor was in 4th place.

In the Non-spinnaker division, Wayne Boberg continue his run of success, winning for the 7th consecutive season. Princess – Charles Scoones – however, was very close to taking the title off Wayne, and actually had more guns than Phyler.

This 21 race W/L series is tremendously competitive and the skills needed to win these short races are far great than the skills used in the normal, often reaching courses set by the majority of the club round the bouys races in Auckland Harbour.

The Stewart 34’s not only run their own championship but can be seen participating in other club events.

The current RNZYS winter series has 12 Stewart 34’s racing, with 7 of them in the mixed (anysize) Spinnaker division and 5 in the mixed non-spinnaker division. Once again this is more than any other one-design division. The results too are amazing for these 50 year old boats. Playbouy and Prince Hal in the Spinnaker division (the smallest boat) is doing exceptional well while Pionnier in the non-spinnaker division (also the smallest boat) is also performing well , both boats regularly beating much larger and newer more expensive boats over the line. The Stewarts were actually designed in 1958 (that’s 56 years old) and they still perform. Princess and Pim – two wooden Stewart 34’s were launched together in November 1960 and are still out racing regularly.

At the Ponsonby Cruising Club, the Stewart 34s are also very competitive. The Thursday Rum race, organised by the PCC for the past 30years (plus) have always had the Stewart 34 support. Over the last few years, there are consistently 6-8 Stewart 34’s out racing and currently they represent 60% of the fleet. Often when the wind blows up over 25 knots, they are the only boats on the start line. The Stewarts can race well in all weather. In the ist 3 races in June this year, Pionnier has been scratch boat on the same handicap as the super fast light weight “Men at Work II”, sailed by John Ward, who probably gets more guns than any keelboat in Auckland Harbour.

The Stewart 34’s have always been tremendously great value for money boats, but at the moment they are sensational. Over the last 18 months, there have been some great bargains and there are still a few available at between $30-65k. listed below is what you can get for your money:

b)      In the super quality 21 summer W/L races there is no entry fee – Free racing – where else do you get that anywhere in the world?

e)      The Stewart 34’s sail fast – most sailors like a bit of speed and in all types of weather these boats sail well. Occasionally they can be exceptional. Pendragon in the Gold Coast Race from Sydney in 2005 won against all comers, and was officially clocked at 22.84 knots at one stage.

f)       The Stewart 34’s have a well organised owners association and because they have been together for well over 50 years, they have ironed out most of the kinks that can trouble a sporting club. They are virtually a “family affair”. For example, Patiki has been in the Peterson family for 47 years, Patari has been in the Brookbanks family for 46 years, Patrician has been in the Sugden family for 35 years. Patere, Phlyer and Playbuoy have been owned by the same owners for over 30 years. Psyche II has been with Rick Roydon for 25 years. The Taylor family have owned Pahi for over 28 years. Pahi was recently upgraded and is in superb condition. At the 50th Celebration held in 2009, Brad Butterworth – the guest speaker at the function, said he had never seen any better workmanship in any boat anywhere than in Pahi.

Poseidon sailed the Sydney to Hobart in 1966 and had a very creditable 8th place over the line with over 70 other boats competing. She has since been used by the Griffin family for cruising for over 20 years. Pia takes the cake for persistence, however. Ken McLaren started building her at Sandspit in 1970. She was finally finished and launched in 2006 by his son, Kevin, who still sails her extensively today with his young family.

g)      Brad Butterworth, Russell Coutts and Chris Dickson all learnt their keel boat skills in Stewart 34’s The class started the historic Citizen Match Racing in 1979 which became the first match racing series to be televised anywhere in the world. By giving Butterworth, Coutts and Dickson this top International experience it virtually started the success of “Team NZ”.

Due to the high number of boats still sailing, the Stewart 34s have a very friendly association. This means that when you go cruising around the beautiful gulf, there will always be another Stewart close by to share your crayfish.